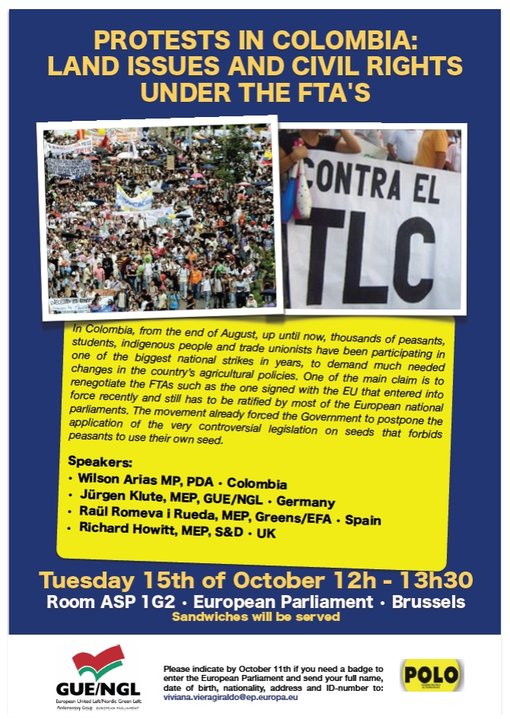 In Colombia, from the end of August, up until now, thousands of peasants, students, indigenous people and trade unionists have been participating in one of the biggest national strikes in years, to demand much needed changes in the country's agricultural policies.

One of the main claim is to renegotiate the FTAs such as the one signed with the EU that entered into force recently and still has to be ratified by most of the European national parliaments. The movement already forced the Government to freeze the application of the very controversial legislation on seeds that forbids peasants to use their own seed (the passing of this law in Colombia is a direct consequence of the signing of the FTA with the US …)

After a strong repression against the social movement, the death of 12 protestors and hundreds of injured, all 16 ministers of the government offered to resign and president Santos finally appointed 5 new controversial ministers.

The government has been accused by the opposition party, Polo Democratico Alternativo (PDA), of depriving small farmers of their land for the benefit of transnationals and for its own interests. For instance, a new law to remove existing restrictions on the concentration of land ownership will be submitted to the Congress. The PDA has also brought to Parliament the request on behalf of the social movements to renegotiate the FTAs signed with the US, the EU and Korea.

We cordially invite you to attend this conference with Mr Wilson Arias, member of Congress with the sole opposition party (PDA) in Colombia. Wilson Arias, along with his party, have been at the forefront in denouncing the concentration, financialization and appropriation by foreign capital of land in Colombia. His accusations led to the resignation of the Colombian ambassador to the US, concerning a case of complicity in illegal appropriation of land. He is now the victim of death threats.