In October 2011 Heiner Flassbeck had been already invited by the Left in the European Parliament to present his view on the Euro Crisis. Since then the development has been even worse than we had feared at that time. Not only Portugal, Ireland and Greece are under enormous pressure of the financial markets and the Troika, but in the last days the crisis reached the heart of the old EU, too, since Italy got into the focus of the finance markets.

Facing this escalating crisis the Parliamentarians in the European Parliament have to ask themselves what went wrong with all the attempts to manage the crisis in the last years. What has to be done for a sustainable solution? The constructive work in the EP was been seriously hampered in the last six month by the Hungarian Presidency which blocked any constructive solution. Instead austerity was the only goal promoted by this Presidency. Under the guidance of the Hungarian presidency the Council made it clear that only the deficit countries would have to carry the burden of the crisis solution, but in no way the surplus countries. But due to the new Polish Presidency Jürgen Klute saw the chance that during the summer the discussion for lasting and more balanced solution might start again. 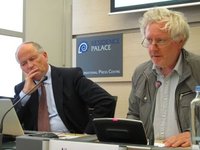 Heiner Flassbeck appeared amazed about public statements of the leading politicians of the Euro zone: to say that there would be no connection between surplus and deficit countries would be like telling a doctor that no connection would exist between head and stomach. But while we might laugh about this medical statement, we are all less amused about the economic one for good reasons, as many of the leading economists are really supporting this point of view.

Regional variation of the inflation rate in the Euro Zone

Heiner Flassbeck stated that the current crisis of the Euro zone is a structural one, not a cyclical one. By all the justified critique of the rating agencies one has to defend their positions as they rightly sense that the politicians of the Euro zone do not take up the necessary measures to solve the deep crisis of the Euro. So the real problems are not only superficial rating agencies or speculators, but the wrong construction of the Euro zone. In fact the Euro zone is, as any monetary zone, an inflation zone. The way the inflation is dealt with is the core of the current problem in Europe. If we have a look at the inflation development in the Euro zone and take the year 1999, the introduction of the Euro, as 100%, than we see that the inflation in the GIPS states has reached 135%, while it reached only 110% in Germany. The ECB's inflation target would have been at 125%, which would have meant 2% annual increase. Which part of Europe diverted more from the official inflation target commonly set by the ECB, Germany or the GIPS states? The GIPS states diverted 10% from the targeted area but Germany 15%. There is no economically sound argument to defend the idea that undershooting an inflation target is any better than overshooting.

At its tens anniversary the ECB was proud of itself to have delivered what it had promised over years: a very low inflation rate. Unfortunately this was only the average inflation rate, which does not say anything about the development in the different areas. Only France got it right over the years. We have again to record it once again that Germany failed more than the GIPS states regarding the inflation target.

Unsustainable behavior of Germany vis-à-vis his partners in the Euro zone
The common argument to defend the German wage cutting policies is that Germany had to fight the Chinese export offensive. If this would have been true, Germany should have told its European partners, that I can't stick to the jointly decided inflation target. In fact Germany has never said that this would have been its policy vis-à-vis China.

Even if Germany would have officially subscribed to this policy it would have had the same disastrous consequences. Germany is gaining trade positions since years as against its European partners. The only lever to solve these problems is a coordinated wage policy.

Despite all public pronouncements the German demand is flat since years, and it is not increasing this year. The real wages are at best constant. The interesting point is, that Germany has not always been a surplus country. Before the introduction of the Euro the Southern European countries were no deficit countries. Germany had once tried before to become a dominant surplus country in the 1980s. But the international Plaza/Louvre agreements stopped the depreciation of the Dollar and thus canceled Germany's attempt to profit at the expense of its partners. In fact we have to ask: what does Germany gain through is export surplus? In fact only paper, and as we become aware in this crisis again: this paper is not worth much.

So the question remains at the end? What to do? How can we solve this crisis in a sustainable way? 90 years ago Keynes understood this problem when he criticized the Versailles treaty. Keynes understood very well that a country can only repay its external debt, when it has a current account surplus. The allied forces of the First World War were very much aware of what it meant to become permanent deficit countries vis-à-vis Germany and thus did not allow Germany to repay its debt – but still put pressure on it to do it. Germany was caught in a classical Catch 22 situation. 90 years later we still do not understand that there is a close relationship between surplus and deficit countries as there is at the same time a close relationship between debtor and creditor. 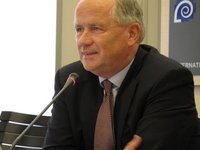 The only way out of the Euro crisis is to work at the root of the problem – the deviations of the unit labour costs in Europe. Unfortunately the German politicians have declared this topic as a taboo, although it would be very good news for the German workers to hear that they have to earn more to save the Euro.

While Germany has to rise its labour unit costs, the GIPS countries have to increase its wages in a corridor between 1 and 3,5%. This does not mean any cut in real wages for the Southern European Countries. This policy would exclude any internal devaluation which just destroys public demand.
Until the GIPS countries will have reached the same labour unit costs level like Germany we have to support these countries by low interested rates.

In the debate concerns were raised about the possibility that deflation might hit the Euro zone, instead of the publicly announced danger of inflation. Another topic was the often heard recommendation that Greece should drop out of the euro zone. Argentina would not be a good example for Greece, as Argentina had to devalue its currency 300%. A hair cut would not help at all, as the root problem, the different labour unit costs would remain. In a few years we would have to face the same problems we face today. The rating agencies were taken up as topic, too. Heiner Flassbeck suggested that the ECB provides money directly to its own low interest rates to the member states. This would diminish the influence of the rating agencies. 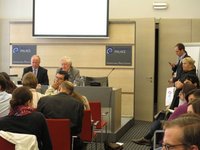