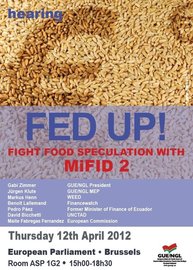 Speculation with food and commodities is respon­sible for the high volatility of food prices in the global south. Therefore, the fight against global hunger must begin on financial markets. The revision of the European directive MiFID and the new associated regulation MiFIR offers one of the best possibilities since a long time to tackle speculation with commodities and food at European level.

According to the directive, position limits are to be introduced. Position limits are predetermined limits for tradable commodities. The Commission's position limits can be bypassed very easily, though. Effective ways to limit food speculation is one of the key issues to be discussed on the conference, April 12th.

But, the revision of the directive holds much more potential: The institution issuing the directive, the Commission, plans to reduce the non-regulated areas of financial markets and thus to reduce the appa­rent success of MiFID 1. After being issued in 2007, MiFID 1 created a huge number of non-regulated areas, an oversight was not provided. If the Commission is aiming to a greater oversight, then much more is needed to protect financial markets from themselves and society from them.

Gabi Zimmer, Jürgen Klute and the GUE/NGL parliamentary group are happy to discuss these questions with European Parliament and Commission representatives and our guests:

David Bicchetti. David is senior economist at UNCTAD, the UN agency for trade and development. He is one of the authors of the study 'Price Formation in Financialized Commodity Markets'. The study shows how actors on financial markets influence the global commodity market and the behaviour of its traders. For more information see www.unctad.org !

Benoît Lallemand. Benoît is a co-founder of Attac Brussels and has 10 years' experience in the clearing and settlement industry. Since November 2011 he has been working as a Senior Research Analyst for Finance Watch. Finance Watch has been founded last year on the initiative of Members of European Parliament, including Jürgen Klute. It was established to track the massive lobbying by financial corporations and to advise MEPs in issues related to the regulation of the financial sector. According to Finance Watch, finance markets are to serve the real economy. For more information see www.finance-watch.org !

Pedro Páez. Pedro is ecnomist and He taught economics, econometrics und sustainable development at several Ecuatorian universities. From 2007 to 2008, Pedro served as Minister of Finance in the government of Rafael Correa. Until 2011, he represented the Ecuatorian government in the creation of a new regional financial architecture and the establishment of 'Banco del Sur'.

Translations in all EU languages are provided.