Why should Goldman's boy lead ECB ? 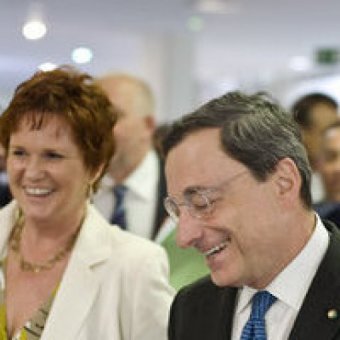 Very soon, Italian banker Mario Draghi will take over as president of the European Central Bank.

While key heads of government have agreed on the candidate - as usual behind closed doors - the current Italian Central Bank chief was invited to an open hearing in European Parliament on June, 14th. Though Parliament does not have the legal right to veto his nomination, a negative opinion would of course severely damage his reputation.

By June, 23rd, a vast majority of MEPs will have made two important and contradictory decisions. Parliament will adopt a reform of the Stability and Growth Pact that will ensure that Member States that do not comply with EU goals for public debt reduction or structural reforms will face fines of around 0.1 % of GDP. Member States delivering misleading fiscal data will also be hit with heavy fines.

Meanwhile, MEPs will green light the appointment of Mario Draghi who previously served as vice-chair of Goldman Sachs International – the very bank that helped the Greek government falsify its statistics and accumulate unsustainable risk and debt.

In order to join the euro in 2001, the previous Greek government accepted highly complex and opaque deals with Goldman Sachs to mask new borrowing and seemingly reduce the debt/GDP ratio from 107% in 2001, to 104.9% in 2002. According to market sources, Greece was charged around $300 million for the deal, and had to commit to heavy long-term payment obligations that are still contributing to current default concerns in the country. Still, as NYT reporters Louise Story and Nelson Schwartz reveal, Goldman Sachs continued to offer similar derivates based on such deals up to November 2009.

Confronted with questions about the affair raised by my French colleague Pascal Canfin as well as by myself, Mario Draghi explained that his service as vice-chair and managing director of Goldman Sachs International only began in 2002 – after the famous 2001 transaction had been concluded. Asked about how he intended to explain to Greek and other European citizens why they are exclusively charged for a crisis that is caused by a conglomerate of actors as well as by a lack of regulation and governance mechanisms at the level of financial markets and economic coordination, Draghi did not show any particular personal or political concern.

For an institution that is, on the one hand, highly independent in monetary affairs, but which, on the other hand, assumes a highly political role in countries that have to rely on European and IMF liquidity, Mario Draghi cannot bring sufficient credibility. As he sadly revealed during the hearing, he is neither likely to come up with any helpful vision that could dig the euro out of its fundamental crisis. Reacting to MEP questions, Draghi was happiest when he had the opportunity to refer to established ECB rules and positions. Regarding his sense of democratic accountability, he did not seem overly concerned by the idea that the European Parliament's green light was still outstanding and that he might be affected by a negative judgement.

It is ever more evident that crucial institutions like the ECB, but also the International Monetary Fund and the Financial Stability Board deserve better. If citizens' trust in our democracies is to be restored, financial institutions cannot remain in the age of feudalism with the same three or four heads of government taking decisions for the rest.