The dark side of Santos’ visit to Europe

Colombian President Juan Manuel Santos has just finished a five days marathon tour of Europe. The official purpose of his tour was to collect money for the ongoing peace process in Colombia. But at the same time, not bothered by any contradiction, he also 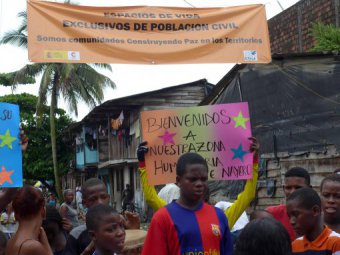 Santos’ visit coincided with the negotiations taking place in Havana, Cuba between the Colombian government and the guerrillas of the FARC rebel group and which aim to put an end to the more than 60 years old armed conflict.

Considering the appalling human rights record of Colombia on one hand and the terrible crisis running through Europe which we are told leaves European state coffers almost empty on the other hand (never mind also that the EU refuses to remove the FARC from its “Terror list”), one would have thought that fundraising for this cause would have been quite the challenge. But this was not the case.

It was as if the six EU countries visited by Santos along with the main EU institutions had not paid any attention to the many accusatory claims made by NGOs, citizens and members of the European Parliament. These claims concerned (to mention only a few): the increasing number of assassinations of human rights defenders and trade unionist in the last 4 years in Colombia; the uninterrupted violation of the rights of minorities (indigenous and afro-Colombian); and the systematic and unpunished land grabbing by criminal groups and transnational companies.

During Santos’ visit, Amnesty International published a letter denouncing that the funds already given by the EU to the Santos government to help with the implementation of the 2011 Victims and Land Restitution Law was, to say the least, not properly used; only some 650 cases had been settled by August 2014, a fraction of total land restitution cases. In only a few of these cases have land claimants actually been able to return to their lands.

As a greeting for the Colombian president, a demonstration denouncing those facts took place in Brussels with slogans such as “Peace without human rights, is not Peace,” “Complete restitution of lands,” “Mr. Santos, peace is a commitment not an investment fund” or “Expanding Jurisdiction of Military Courts is not peace.”

While in Brussels, Santos was audited by the Foreign Affairs Committee of the European Parliament. The vice-president of this Committee, Javier Couso, declared to the press that “the EU money will be given if there is clear guarantee of respect for international law, and we have noted serious deficiencies.”

The deafening silence of the EU

Quite plainly, the EU sees Colombia as a land of (economic) opportunities, Spain being the main foreign investor for the country. It turns out that the peace agreement currently negotiated in Havana may very well result in the “securing” of Colombia from an investor’s point of view.

Not to mention the possible demobilisation of the FARC, which would swing the doors wide open to large unexplored territories previously under control of the guerrilla group. Having access to huge portions of land replete with gold, silver, platinum, emeralds, coal, oil (you name it) is the kind of perspective that is bound to stir up emotions for many transnational European companies. Some would call it the new “Eldorado” for the modern conquistadores.

And when it comes to obtaining investor-friendly terms (for the transnational companies that is), Santos is the perfect friend to have. Colombia’s current economic model relies heavily on foreign direct investment (FDI) and contrary to the left-wing governments of the region (a majority nowadays) that tend to impose taxes on those big companies in accordance with the many needs of their populations, Santos is more likely to yield to the terms of Big Business and roll out the red carpet.

Just last month, the president received two guests of royal importance: Prince Charles of Wales and Princess Astrid of Belgium. Surely their visit had much to do with the great scenery that only Colombia can offer, but as the old saying goes “opportunity makes the thief” and a few juicy deals will undoubtedly have been stricken during their visit.

From a juridical point of view, the main tool for enhancing European investment in the Colombian market is the free trade agreement concluded between the two parties. The FTA was implemented last year even though not all national parliaments of the EU member states had ratified it (it was “provisionally” implemented). This controversial agreement has raised (both before and after its signing) great concern among MEPs, European and Colombian trade unions, NGOs, indigenous people, peasants and victims of the armed conflict.

The silence of the EU authorities concerning the appalling human rights violations taking place in Colombia makes a whole lot of sense when you consider the fact that the EU legally cannot have trade relations with countries that do not respect Human Rights. More specifically, European Parliament resolution of 13 June 2012 on the EU trade agreement with Colombia states that “failure to respect human rights and democratic principles would constitute a ‘material breach’ of the Trade Agreement which, under public international law, would give rise to the adoption of appropriate measures, including the possibility of terminating or suspending the Agreement partially or totally [...] Proper monitoring of the respect of human rights by all signatory parties must be ensured and the practical enforceability of the Human Rights Clause must be guaranteed “.

As of today no measure whatsoever has been taken in accordance with this resolution.

Going back to the official purpose of Santos’ visit, it is interesting to note that he not only had peace (or raw materials) to offer: he also wanted to export soldiers.

Indeed, should a deal be reached with the FARC, many Colombian soldiers would be left unemployed. A way of making this deal acceptable for the Colombian military is to promise them job opportunities in “international peacekeeping operations” and military training programs throughout the world.

It would seem that the president has not spared his efforts on the subject since information coming from the German Bundestag has revealed that the Colombian army is to take part in various EU military operations. Santos also offered to send a frigate to participate in operation “Atalanta” (in the gulf of Aden). Moreover, Colombia plans to intensify its cooperation with NATO and the government confirmed that it attended meetings at NATO School in Oberammergau, Germany.

Harsh criticism both in Colombia and abroad emerged following those decisions. Notably, human rights defenders pointed out the thousands of extrajudicial killings that were carried out by the Colombian military and the 90% percent impunity rate that surrounded those crimes, precisely when Santos was minister of Defense.

As president, Santos now seeks to push reforms to expand the scope of the jurisdiction of military courts, which the United Nations Human Rights Council describe as “representing a major setback in Colombia’s long-standing fight against impunity for international human rights and humanitarian law violations.”

Of course, we truly hope that the peace negotiations will put an end to the more than 60 years old Colombian armed conflict. But one must be fully aware of what peace means for Santos. For him and his government, peace is above all a way to provide lucrative opportunities to Big Business and his investor friends by getting rid of combat zones and regaining control on large territories of the country.

But the whole question of land distribution and land use which is essential to understand the initial uprising of the FARC and the beginning of the armed conflict, is far from being resolved. On the contrary, as recent figures show, 6.6 million hectares of land have been violently taken from Colombian farmers and Colombia is the second country in the world in terms of internal displacements.

Santos’ proposition for a “new, post-conflict Colombia” now aims to increase land concentration in the hands of big companies and to turn the local populations into mere employees.

In the end, it is now to be feared that with “peace”, land spoliation will not be achieved through violence and war anymore but rather through perfectly legal mechanisms blessed by the Colombian government, the EU and most of all Big Business, as usual.