Prof. David L. PHILLIPS, Director of the Program on Peace-building (Columbia University’s Institute for the Study of Human Rights) 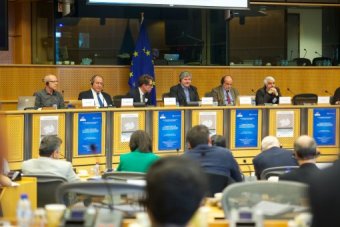 The PKK declared a ceasefire and withdrawal of forces on March 23, 2013. Its announcement represented a historic opportunity to address the Kurdish conflict in Turkey, which has claimed more than 30,000 lives since 1984. Subsequently, the peace process has languished. Turkey’s Prime Minister Recep Tayyip Erdogan treated the ceasefire as a goal in itself, rather than as part of a process to address the root causes of conflict. The PKK suspended its withdrawal on September 5, 2013.

Reforms represent progress, but they stop short of constitutional guarantees for Kurdish identity, cultural and political rights. Reforms fail to:

Turkey can benefit from the experience of other countries using constitutional power-sharing as a tool for conflict resolution.

Federalism accommodates differences among diverse peoples who enter into a common, democratic, political order. The central government has paramount authority granted through the constitution. It usually retains powers regarding defense, foreign policy, and fiscal affairs. In federal states, sovereignty is shared between the central government and subnational units. States constituting the federation have an existence and functions that cannot be unilaterally changed by the central government. Symmetrical federalism allocates equal powers to each subnational entity. Asymmetrical arrangements take into account the unique requirements of different subnational units, allocating powers differently.

A broad set of global standards for minority rights has evolved over the past 50 years. The two over-riding issues are (i) equality/non-discrimination and (ii) protection and promotion of the unique identity of minorities. Regional and cultural autonomy is also widely used to protect and promote minority and group rights. Autonomy arrangements enhance sovereignty, while devolving authority in the fields of governance, economy, and culture.

Autonomy will change Turkey fundamentally, making the country more representative and democratic. The process of devolution can start by applying the European Council’s Charter on the Autonomy of Local Governments. If Turkey is not prepared for devolution across the board, Erdogan can take an asymmetrical approach starting with the devolution of powers to local government in the Southeast.

Constitutional power-sharing can drain the swamp of support for the PKK. However, other peace-building measures are needed including disarmament, demobilization and reintegration (DDR) of ex-combatants, amnesty and asylum, as well as justice, truth-telling and reconciliation.

DDR contributes to security and stability in post-conflict recovery by removing weapons from the hands of combatants. It takes the combatants out of military structures and helping them to integrate socially and economically into society and to find livelihoods. According to the UN:

DDR is usually defined within a cease-fire or peace accord, providing the political and legal framework for DDR. Since the late 1980s, DDR has become a standard feature of peace agreements and post-conflict peace-building environments. Thirty-four DDR programs were created between 1994 and 2005. In 2007, there were over a million former combatants participating in DDR programs in 19 countries. The total cost of these DDR programs was estimated at over $1.6 billion, an average of $1,434 per person demobilized.

Local ownership is critical. DDR often fails when it is perceived as a top-down initiative, with no involvement or coordination with local officials and directly affected communities. “Community-centered” DDR links the needs of ex-combatants and victims with those of communities as a whole.

Amnesties are often incorporated into peace agreements so that the DDR process can proceed. Amnesties advance the goal of peace and reconciliation by luring combatants from a rebel movement, encouraging exiles to return, assisting the reintegration of displaced civilians and former fighters and protecting state agents from prosecution. Amnesty arrangements typically address:

There is an inherent tension between the role of amnesties in a DDR process and the goal of accountability, which is central to transitional justice. Amnesties encourage ex-combatants to disarm and demobilize, advancing the goal of peace in the short term while doing the least possible harm to the transitional justice values of truth, justice, reparation and reform, which contribute to durable peace in the long term.

Some view amnesties as sources of impunity that compromise transitional justice by removing the possibility of criminal accountability. Amnesties covering the most serious crimes may also be seen as undermining victim's rights. In such instances, amnesties can damage public confidence in the rule of law.

So far, Öcalan has been able to coordinate the PKK's participation. But senior commanders could resist Öcalan's leadership if the peace process culminates in their imprisonment. Spoilers may try to undermine the peace process if they fear legal proceedings will be brought against them. Why would battle-hardened field commanders allow rank and file recruits to leave the organization if they themselves are vulnerable to prosecution?

For Turkey, an effective amnesty program could distinguish between new recruits and senior commanders. Amnesty eligibility could be offered to new and lower-ranking PKK members with no command responsibility. Many rank and file tea boys have never pulled a trigger. More challenging are senior commanders who have been given “red notice” by Interpol. Asylum in their country of current residence may be a better option.

In the aftermath of violent conflict, many countries have adopted a truth-telling process or institutionalized truth and reconciliation through the establishment of a truth and reconciliation commission (TRC). Truth-telling helps states transition from war to peace or from authoritarian rule to democracy. As an alternative to punitive justice, it can build confidence, break the cycle of violence, and entrench the rule of law.

TRCs are essentially victim-centered. They typically consider the pattern of abuses over a specified time, as opposed to a particular event. At the end of its mandate, the commission provides a narrative of the historical period, including an account of the causes and consequences of violations. TRCs can directly support prosecutions (e.g. Argentina, Chile) or be an alternative to prosecutions (e.g. South Africa).

Design of a truth-telling process depends on the range of political issues, strategic considerations and technical considerations.

Truth is expressed in two different ways – as voice and as evidence. Voice involves the personal accounts of victims, witnesses, family members and survivors, who tell their story in their own words. It provides them with a forum to be heard, maximizing the emotional impact and healing power. Truth is also expressed through testimony, which involves gathering evidence for trials in the event that a regime comes to power that supports accountability.

Non-governmental or unofficial truth projects also produce memory works (theater, art, video and literature projects that focus on the past, as well as memorials, museums and traveling exhibits).

The Imrali peace process would be advanced through a change of tone and format. Kurds resent Erdogan’s unilateralism and lack of transparency. Negotiations would be served by an expanded set of interlocutors on both sides, as well as a system for monitoring by the international community. Talks would benefit from a new venue and facilitation by a third party.

President Masoud Barzani of the Kurdistan Regional Government (KRG), an autonomous region in Northern Iraq, can play a role. Barzani has close contact with PKK factions. In addition, Turkey and the KRG have become strategic partners. Turkish firms sold $13 billion in goods to consumers in Iraqi Kurdistan in 2012. Its construction companies signed contracts for more than $30 billion. Energy cooperation is expanding. Erdogan recently invited Barzani to Diyarbakir. The two stood side-by-side talking about “Kurdistan.”

Ankara has taken steps to moderate its harsh rhetoric towards the PKK. European governments and the United States should remove the PKK from their lists of Foreign Terrorist Organizations in recognition of the PKK’s ceasefire, and to revitalize the peace process.

Negative regional and domestic developments have created an unhelpful context for negotiations. Turkey’s policy of “zero problems with neighbors” is a fiasco. It is in conflict with every neighbor except Iraqi Kurdistan.

Erdogan is a strong advocate for military action in Syria, but Turks are not convinced. According to a recent public opinion survey by the German Marshall Fund, 72 percent of Turks think their government should stay out of Syria “completely.” They resent the costs of supporting Syrian refugees and the spread of cross-border violence.

Turkey allegedly supports the Al-Nusra Front and other jihadi groups. These foreign fighters are engaged militarily with both the Syrian armed forces and the Syrian Kurds. Turkey wants to prevent them from establishing an autonomous region in Syria, what they call “Rojava.”

Siding with Sunni extremists, Turkey is aligned with Saudi Arabia and other Gulf states against Assad’s regime. Erdogan also has ties to the Muslim Brotherhood in Tunisia and Egypt, and he is an open supporter of Hamas.

On the domestic front, Erdogan’s democracy credentials have been tarnished by his government’s violent crackdown of peaceful protesters in Gezi Park on May 28, 2013. The protest spread to 70 cities, fueled by police brutality and systematic detention of protesters. Turkey lost its bid to host the 2020 Olympics partly as a consequence of excessive violence in Gezi.

Turks also resent the intrusion of government into their private lives. Freedom of expression is under attack, with judicial proceedings used to eliminate political opponents. Since 2007, more than 500 journalists and military officers have been arrested and accused of plotting against Erdogan’s government. The Committee to Protect Journalists reports that Turkey ranks 154th out of 179 countries in terms of media freedom.

Recent events in Turkey and the region cast doubt on whether he is a credible peace partner. Given his arrogance, authoritarianism, and polarizing personality, does Erdogan have the temperament to negotiate sustainable peace with the PKK?

Erdogan will always act in his own political self-interest. He needs the peace process to succeed if he wants to burnish his credentials both domestically and internationally. If he walks away from the peace process, Erdogan will have to explain to voters and take responsibility.

As Turkey embarks on a two-year cycle of elections, Erdogan is at a fork in the road. He may toughen his confrontational approach, catering to nationalists in the Turkish electorate. Alternatively, he could act more like a statesman, showing magnanimity and flexibility. The international community can encourage Erdogan by recommitting to Turkey’s EU accession process, and supporting Turkey’s interests in the region.

For Öcalan’s part, he needs to show progress resulting from the cease-fire in order to fend off hard-liners who criticize his approach for being too conciliatory. If the PKK cancels its participation in peace negotiations, it could split causing resurgent conflict. Both sides realize that a return to arms is not desirable.

According to the “ripeness theory,” every conflict reaches a point when the parties are tired of confrontation and determine it is in their interest to make peace. Turkey’s conflict with the PKK is ripe for resolution. With practical steps, principled leadership, and encouragement from the international community, the peace process still represents a win-win for both sides.

(David L. Phillips is Director of the Program on Peace-building and Rights at Columbia University’s Institute for the Study of Human Rights. He served as a Senior Adviser to the State Department’s Bureau for European Affairs and as a Foreign Affairs Expert at the Bureau for Near Eastern Affairs).

"THE EUROPEAN UNION, TURKEY AND THE KURDS"

Turkey, the Kurds and the Imrali Peace Process: