MEPs concerned about land grabbing by European companies in Colombia

HR of the EU for Foreign Affairs, Catherine Ashton,

We the Members of the European Parliament express our deepest concern about the land grabbing process currently taking place in Colombia. Large companies, including several multinationals, have been buying land in an area in the eastern part of the country known as the high plains (Altillanura), with the objective of developing agribusiness projects. 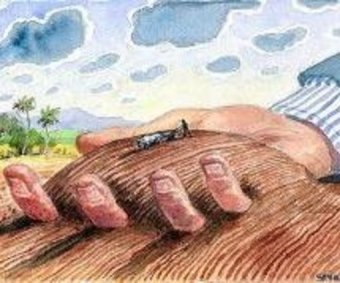 This process violates Colombian law, which states that public lands should be assigned to poor rural workers and subsequently cannot be assembled in areas larger than those given to them. We are concerned about the social fabric of the area since the purchase of land by large corporations removes communities from their traditional territories, also inhabited by indigenous groups. In addition, projects in these areas can have serious environmental consequences, affecting a fragile ecosystem characterized by high biodiversity and water resources.

European companies such as Poligrow have been involved in this land grabbing process. Poligrow bought 13781 acres, three times the legal limit. Its lands are located in Mapiripán, a town known for having been the scene of acts of severe violence such as the massacre perpetrated by paramilitary groups in 1997.

It should also be noted that other European nations have been used by these land grabbers to avoid controls of their investments. A case in point is Riopaila Castilla, a Colombian sugar producer who created an investment fund in Luxembourg to take over farms bought by a series of shell companies created with the aim of violating legal constraints on land concentration.

The Colombian government has promoted these large projects and has been permissive towards the law violations that have been committed. Even senior officials have been involved. Carlos Urrutia, the Colombian Ambassador to the U.S., was a director and shareholder of the law firm that designed the legal strategy used by Riopaila and Cargill to avoid legal limits on land grabbing. The agency responsible for setting the demands to annul illegal land purchases has not drawn enough attention, and judicial processes have not produced concrete results, despite all the evidence available. Instead, the government has tried to amend the legislation, adapting it to the interests of big business.

Furthermore, it has been alleged that the Law of Victims and Land Restitution would appear to be an attempt to stimulate the land market, since it does more to ensure the legal security of investors than it does to protect the physical security of those demanding restitution of their land. The objective of the law consisting in compensating the damage caused to the victims of the Colombian conflict is not advancing as expected; merely 200 sentences have been pronounced during the 3 years the law has been in effect.

We condemn the fact that some political Colombian leaders and promoters of land restitution, who have presented these claims, have received death threats. One example is Congressman Wilson Arias, from the opposition party Polo Democrático Alternativo, along with other opposition members of Parliament, community leaders, indigenous leaders, victims' representatives, who were all the target of attacks during the first semester of 2013. We wish to express our solidarity to all of them, and we expect the Colombian authorities to give them the necessary protection to preserve their lives and find those responsible for these attacks and intimidations.

We call on the European community to be attentive to this phenomenon, which exacerbates the concentration of land in Colombia, a critical issue in the prolonged armed conflict in that country. Also to be alert to illegal acts and violations of Human Rights involving European companies. And at the same time, to give full guarantees to the political opposition in Colombia and the rights of the leaders who are in danger.