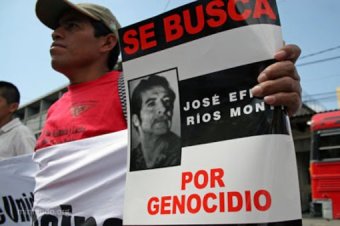 Members of the European Parliament have expressed their deep concern for the overriding of the genocide sentence against Rios Montt by the Guatemalan Constitutional Court.

Claiming procedural errors, the former dictator's lawyers succeeded in overturning the conviction pronounced on May 20th that sentenced Rios Montt to 80 years in prison for genocide and crimes against humanity. As a result, the trial, which has been postponed until April 2014, will not retain any of the witness accounts and arguments made after the 19th of April, thus none of the courageous testimonies of systematic rape, torture, murder, starvation and forced displacement, nor the final sentence the previous court had ordered.

To the survivors of the tragedy and victim's families, most of whom had waited over 30 years for the verdict, this new decision brings enormous uncertainty to their struggle for justice.

You can download a spanish version of the letter here and here the english version.

As members of the European Parliament we have engaged with your government as part of our commitment to end impunity for war crimes, genocide and crimes against humanity wherever it persists; and in the last months have closely followed the path-breaking trial of former de facto head of state Efrain Rios Montt and his chief of military intelligence, Mauricio Rodriguez Sanchez, on charges of genocide and crimes against humanity. The dozens of victims who made their way to court to offer their painful testimony and demand justice are a tribute to the persistence of human dignity even in the face of devastating loss. The trial itself is a testament to the progress of the rule of law in Guatemala.

We are, however, gravely concerned about some of the recent developments. Firstly that a multitude of court rulings focused on procedural errors have left the trial in legal limbo and if this were to continue, the fundamental right of victims to justice would be sacrificed. Secondly, in recent days a government minister has promoted the notion, currently also before the Constitutional Court, that historical amnesties could be applied to international crimes. This position is definitively at odds with international law, Guatemala's commitments under international law, and with the very spirit of the Peace Agreements that explicitly barred amnesties for the most serious crimes under international law.

In light of these developments and in order to maximize transparency and ensure the full integrity of the proceedings from this point forward, we urge your government to:

1) ensure that the rights of victims are protected by finding a way to allow the trial to continue and come to a conclusion, free from unusual delay and with full respect for the rights of the accused;

2) continue to take all necessary measures to ensure the safety of trial participants, including judges, counsel, and witnesses;

3) refrain from political endorsement of options that are clearly incompatible with Guatemala's commitments under international law;

4) take all measures to ensure that no state or private agent acts to threaten judicial independence; and

5) continue to accommodate international interest in this ground-breaking genocide trial, including by welcoming a monitoring visit by the UN Special Rapporteur on the Promotion of Truth, Justice, Reparation and Guarantees of Non-Recurrence.

In any country, bringing a former head of state to trial on charges of genocide has the potential, in the short term, to polarize opinions. However, this historic genocide trial is an important exercise in transitional justice that holds promise for Guatemala on social, political and legal levels.

We welcome the efforts to safeguard judicial independence and ensure that this trial was able to come before the courts as well as the concern demonstrated for the rights of the accused. These important and commendable efforts to deal with the past now hang in the balance. We urge you to do everything within your authority to ensure that the trial of Efrain Rios Montt and Mauricio Rodriguez Sanchez can be brought to a full and just conclusion. Guatemala's willingness to see through this important exercise of accountability, even under the most difficult of circumstances, would stand as a milestone in its own development, contribute significantly to peace and reconciliation in the country and also serve as an inspiring model for the on-going fight to end impunity around the world.

We look forward to a response from your side,

ROMEVA i RUEDA Raul (Green/EFA, Spain), Delegation for Relations with the

SCHAAKE Marietje (ALDE, The Netherlands), Committee on Culture and Education